Black Canyon Hydro LLC announced that it was withdrawing its application for the Black Canyon Hydropower Project. This project would have constructed a new dam on the North Fork Snoqualmie River, severely impacting native rainbow and cutthroat trout, posing a risk to the City of Snoqualmie’s water supply, and irreversibly harming a world-class kayak run. 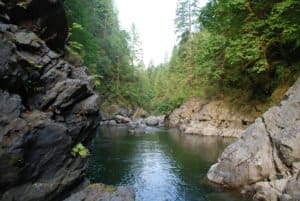 Washington Wild has worked as part of a coalition led by American Whitewater to oppose the development of the dam over the past 5 years. Washington Wild signed onto comment letters and engaged its membership in opposition to the proposal. While we support hydropower as a source of clean and renewable energy, we feel strongly that the focus should be on retrofitting existing dam structures to increase capacity rather than constructing new dam on free flowing rivers. New dams come with significant long term impacts to fish, recreation and water quality.
Members of the coalition took the position that the North Fork Snoqualmie should remain in its natural free-flowing condition and industrial development of this canyon is not in the public interest. The US Forest Service found this segment of the river eligible for the federal Wild and Scenic system, and recommended it for designation. Additionally, the Northwest Power and Conservation Council identified it as an area that is protected from hydropower development. The river also forms the border for the Department of Natural Resources Mt. Si Natural Resources Conservation Area, which includes some of the best remaining intact old-growth riparian forest at low elevation in the Western Cascades. Finally, the lands along the river are protected by a conservation easement held by King County that specifically prohibits hydropower projects of the scale proposed.
Share this: