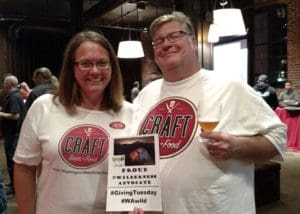 Craft beer. Craft food.  A wild and green Washington for generations to come.  All these combine into one amazing event in October, Craft Beer + Food.  This one of a kind event hosted by Kendall and Kim Jones of the Washington Beer Blog raised a net of over $9,000 to benefit Washington Wild, brought out almost 300 people and was supported by 12 partnering breweries and restaurants.  People from the beer, foodie, and Wilderness communities all came out to support this event and enjoy delicious pairings. The festival is about the beer, the food, and about the cause, but it is also about the people.  The people that work for the supporting breweries and restaurants, the people who host the event, the people who attend the event and the those impacted by the nonprofit work of Washington Wild.

Brewshed® Partner Reuben’s Brews and their pairing partner the Carlile Room getting ready for a great event!

As the only statewide conservation organization primarily dedicated to protecting Washington’s wild lands and waters, Washington Wild emphasizes the people portion of the equation.  By building coalitions and through other collaborative efforts, Washington Wild plays a key leadership role of bringing diverse groups together to promote and protect a wild and green state for generations to come.  When working in an area we identify the multiple uses, benefits, values and subsequently the people who have a vested interested in the wild landscape, so that we can work together to protect the landscape and all it encompasses. In the last year Washington Wild made over 1,000 connections with local elected officials, business owners, recreation organization, sportsmen, and breweries to support the permanent protection of wild lands and waters.

Wild waters and the watersheds that protect them impact the quality of Washington beer in large portions of the state.  It hasn’t taken long for our local brewing community to jump on board to support Washington Wild’s efforts to protect a critical part of the brewing process, water. We call this the Brewshed® Connection: protected water leads to superior downstream beer.  Since 2012 the Brewshed® Alliance climbed from 8 partners to over 30 in almost 15 different cities throughout Washington State.  With the help of these partners, including the Washington Beer Blog and Craft Beer + Food, we have reached thousands of beer drinkers with the Brewshed® Connection and raised over $50,000.  In one year the Brewshed® Alliance went from generating a little less than $5,000 to contributing 10% of the revenues of Washington Wild’s budget at large.  Beer will change the world, and we know how- by keeping it wild!

Craft Beer + Food Attendees popping their balloons to find out their prize!

Pop!  And the winner is….. you only get to know if you were there!

We at Washington Wild are so grateful to Kendall and Kim Jones for their relationship with the Brewshed® Alliance and choosing Washington Wild as the beneficiary of this awesome event for the last two years.  As a small nonprofit this event makes a huge difference to our budget and goes a long way to support the Brewshed® Alliance and conservation work throughout the state.  Additionally we would like to thank all the brewers and restaurants that participated with a special thank you to our host Tom Douglas Restaurants!  And finally, thank you to all the attendees, especially those who came by to pop a balloon!  If you didn’t get a chance to pop a balloon then look for the 3rd Annual Washington Wild Brewshed® Beer Fest in June, as the balloon popping shenanigans will return!

Brewmaster’s Bakery + PostDoc Brewing
Cram Session Coffee Porter paired with Espress-O Yo’ Self Granola (using the same blend of coffee as the beer) topped with a handcrafted Cram Session infused marshmallow and a side of Cram Session Syrup.