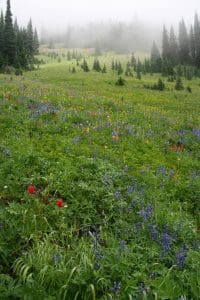 On a steep alpine ridge, a kaleidoscope of wildflowers glows in the dense morning fog. Scarlet paintbrush, purple lupine, and orange tiger lily. Swirling mist shrouds the mountain peaks that I can sense but cannot see. The only sound is the beat of my heart. My two hiking companions and I dip below the tree line and spy a dozen Roosevelt elk bedded down in the forest. Their brown hides and branched antlers meld with the surrounding trees.

Farther down the trail I notice a dark shadow beneath an alpine hemlock. But how can there be a shadow in fog? The shadow moves, I halt, and my two pals rear-end me, resembling a scene from The Three Stooges. Only we’re not laughing.

The shadow shapeshifts into a black bear, who swings her head from side to side and stands her ground. We stand still. The only sounds are our three racing hearts. And then faint scraping. The sow looks up as two fuzzy cubs claw their way down the tree looking wide-eyed over their shoulders at us. On the ground, the cubs touch noses with mom, who escorts her trio away from ours. 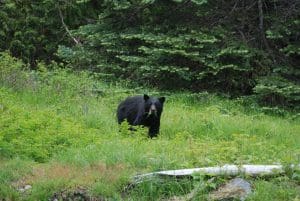 It’s been more than three decades since I hiked that ridge in the Daniel J. Evans Wilderness in Olympic National Park, and yet that memory is as fresh as a spring rain. It was my first backpacking trip in my new home state where I became smitten with wild country. Every year since I’ve explored the backcountry in many parts of Washington as well as Alaska. My early trips followed a similar pattern—5 days or so, enjoying every moment, and craving pizza, ice cream, and a hot shower toward the end. I learned that everything I really needed in life I could carry on my back. 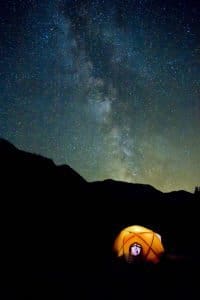 Over the years, my trips increased in duration and I stopped craving creature comforts. I learned to ditch the clock and live by the rhythms of rivers, the wind, and my body. I traveled when the weather was good. I ate when I was hungry and slept when I was tired.

Each time I returned home, I noticed a shift in my outlook on life. Things that used to seem insurmountable were now trivial. Things I once took for granted—potable water, heat, and a pillow—were now luxuries.

Maybe the greatest lesson I’ve learned along the trail is that wild places don’t stay wild by accident.

My wilderness ridge hike in the Olympics was protected after years of advocacy and the passage of the Washington Parks Wilderness Act of 1988. Washington’s wild legacy was passed on to us and we have an obligation to pass it on to those who follow. We need stalwarts who will always defend and advocate for our forests, rivers, mountains, prairies, and deserts. People who do this work so that we can all thrive. People like the staff and volunteers of Washington Wild. People like you. 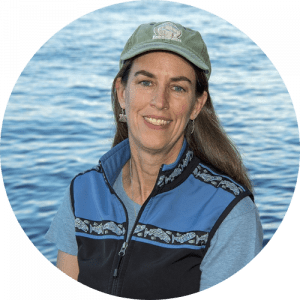 Amy Gulick is the recipient of Washington Wild’s 2022 Conservation Voices Award. She is a photographer and writer, and author of “The Salmon Way: An Alaska State of Mind” and “Salmon in the Trees: Life in Alaska’s Tongass Rain Forest”.