View of the length of 26 Mile Valley in the Skagit Headwaters Donut Hole. Photo courtesy of the Wilderness Committee.

An international coalition cheered a major victory today: A settlement to halt mining in the Skagit Headwaters. In 2019, Imperial Metals Corporation filed a permit to begin mining in the “donut hole” of the unprotected Canadian headwaters of the Skagit River. Today — after a nearly three-year decision process — the British Columbia government, Imperial Metals, and the Skagit Environmental Endowment Commission (SEEC) announced a signed Memorandum of Agreement (MOA) that stipulates the return of all mining and related rights in the Silver Daisy area of the Canadian Skagit Headwaters held by Imperial Metals back to the Province of British Columbia.

The international coalition coordinated by Washington Wild grew to nearly 300 Tribes, First Nations, elected officials, local businesses, and conservation, recreation, and wildlife organizations united in their opposition to Imperial Metals’ proposal to pursue a mining permit at the source of the Skagit River, which flows through Washington State before reaching the Puget Sound.

“This is incredible news and represents a win/win for indigenous peoples, British Columbia visitors to the Skagit and Manning Parks, downstream communities and businesses in Washington State and Imperial Metals,” said Tom Uniack, Executive Director for Washington Wild, a statewide conservation organization who is coordinating an international coalition of U.S. and Canadian stakeholders and Tribes and First Nations in opposition to the proposed mining and logging in the Skagit Headwaters. “It was clear that the coalition’s efforts played a key role in stopping the logging threats and now the mining threat to the iconic Skagit River and its headwaters.”

Since March 2019, when Imperial Metals filed its request for a mining exploration permit from the B.C. Ministry of Mines, more than 50 media stories from British Columbia and Washington State have focused on this controversial proposal. To date, more than 6,000 individuals have sent letters or emails to the British Columbia government and other entities opposing the granting of the mining exploration permit. 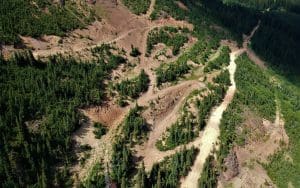 Photo courtesy of the Wilderness Committee

Downstream and local community fears are not unfounded. Imperial Metals was responsible for the infamous Mount Polley mine disaster of 2014, which spilled more than 2.6 billion gallons of toxic sludge into the Fraser River watershed, one of the biggest environmental disasters in Canadian history. The proposed mining exploration activities in the Skagit Headwaters include creating access roads, conducting surface exploration drilling with associated water supply and catchment sumps, and mechanical trenching over a five-year period of continued disturbance.

These headwaters are unceded Indigenous lands. Stó:lō, Syilx and Nlaka’pamux people have accessed the Skagit headwaters forests, meadows, and streams since time immemorial for essentials such as clean water, wild foods, old-growth wood, and other cultural materials needed for medicines and spirituality. The B.C. Government conducted formal consultation with 16 First Nations over concerns about the mining proposal. U.S. Tribes in Washington State — including the Swinomish Indian Tribal Community, Upper Skagit Indian Tribe, Sauk-Suiattle Tribe and Samish Nation who rely on downstream values like salmon, clean water, and wildlife for their Tribal treaty rights and/or lifeways — also weighed in opposing the mining threat.

“Today the Swinomish Tribal Community celebrates the permanent protection of the Skagit River Headwaters from mining,” said Swinomish Tribal Community Chairman Steve Edwards. “This is an extraordinary conservation success that will benefit current and future generations of Coast Salish People, and we express our gratitude to all our conservation partners who advocated with us to protect our salmon and ecosystem forever.” 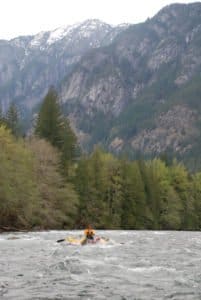 The Skagit Watershed is a transboundary issue. On the Canadian side of the border, concern is widespread over the future of recreational and economic benefits. Downstream in Washington, worries over fisheries and water quality abound as the Skagit River flows through the state, winding through the scenic North Cascades National Park, the Mt. Baker Snoqualmie National Forest, and the renowned Skagit River Valley before reaching the Puget Sound. The Skagit River provides one-third of the freshwater inputs to the Puget Sound and supports the largest populations of threatened steelhead and chinook salmon in the Puget Sound and the largest run of chum salmon in the conterminous U.S.

In the spring of 2021, the City of Seattle sent an updated letter opposing the mining. Additionally, 15 local Skagit County governments, Tribes and local land use authorities sent resolutions or letters opposing the mining in the Skagit Headwaters to the British Columbia government, including the cities of Mount Vernon, Anacortes and Concrete, as well as the Skagit Public Utility District and the Skagit County Commission.

“Here in Skagit County, this is great news. The magic Skagit River is central to how we live, work and play,” said Richard Brocksmith, City Councilmember for the City of Mount Vernon, WA. “A proposed mine in the Skagit Headwaters would have threatened our community’s investments in salmon recovery, the supply of clean water for drinking and farming, and the health of Puget Sound while contributing zero financial or social benefits to our community.”

Today’s announcement is a positive resolution to concerns that had been raised on both sides of the border about potential impacts to the Skagit watershed, Manning and Skagit Provincial parks, and downstream values like salmon habitat, clean water, and Tribal treaty rights and lifeways in Washington State. There is strong interest in moving forward with a process consulting with affected First Nations on the future use and protection within the Silverdaisy watershed in a process led by B.C. Parks and the Ministry of the Environment and Climate Change Strategy.