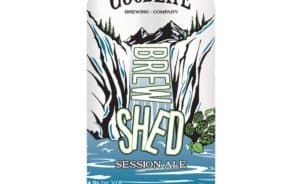 BEND, OR (Wednesday, January 6, 2016) Brewing balanced, consistent beer and giving back to local charities committed to protecting Mother Nature are two of GoodLife Brewing’s core values. We are excited to announce the crossover of the two with our “Sustainable Session Series.”  Starting February 3rd, 2016, GoodLife Brewing is launching the Sustainable Session Series that will feature three different session ales associated with three different organizations giving back 1% of total sales to each organization.  The first beer in the Series is called Brewshed® Session Ale, and is benefiting the Brewshed® Alliance.

GoodLife Brewing’s Marketing Director, Chris Nelson, said, “All the breweries in Bend are fortunate enough to be able to use our tap water for the water we use in the brewing process.  That’s not the case in most cities, so GoodLife recognizes the importance of being stewards and protecting our water.”  Gordon also added, “The beauty of the Brewshed® Session Ale is that it highlights more than just the connection between protected water and superior downstream beer, but also the connection between the organizations.  It’s a beer with an impact and all people have to do is enjoy it to support a great brewery and conservation in both Oregon and Washington State.” Next time you head out into the wilds, head to your local store and pick up some cans to share with your friends.

Brewshed® Session Ale will be available in 6-pack cans and draft (1/6 BBLS and ½ BBLS) between February and June with distribution in Oregon, Washington, and Idaho.  The second can of the Series is launching July 1st, 2016 with more details coming soon.

GoodLife Brewing and the Brewshed® Alliance are throwing release parties for Brewshed® Session Ale at the following locations:

As brewers of hand crafted ales, we are outdoor enthusiasts who look forward to sharing our craft beers that are most balanced and of the highest quality. GoodLife Brewing has been making award-winning beers since June 2011 in its home of Bend, Oregon. GoodLife’s adventurous ales are Descender IPA, Sweet As Pacific Ale and a selection of seasonal beers. In addition to making beer, GoodLife Brewing enjoys giving back to the community by supporting many local and national non-profit organizations. Play hard, live easy and enjoy GoodBeer for GoodLife! For more information, visit www.goodlifebrewing.com, or find us on Instagram, Facebook and Twitter.