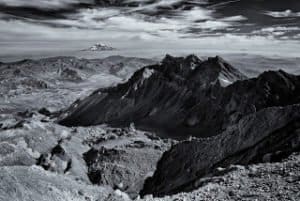 Photo courtesy of one of WW’s 2012 Photo Contest Winners

Tuesday, December 11, 2012, was International Mountain Day. This day was created by the United Nations to generate awareness about the importance of mountains to life, highlight the opportunities and constraints in mountain development, and to build partnerships that will bring positive change to the world’s mountains and highlands.

According to the UN, “Mountains are crucial to life. Whether we live at sea level or the highest elevations, we are connected to mountains and affected by them in more ways than we can imagine. Mountains provide most of the world’s fresh water, harbor a rich variety of plants and animals, and are home to one in ten people. Yet, each day, environmental degradation, the consequences of climate change, exploitative mining, armed conflict, poverty, and hunger threaten the extraordinary web of life that the mountains support.”

Washington State is home to some of the most majestic peaks in the world. We boast not just one, but two significant mountain ranges – the Cascades and the Olympics.

Founded in 1979, WW has been working for over 30 years to protect and restore wild lands and waters in Washington. Many of the Wilderness areas, National Monuments, and Wild and Scenic Rivers we have advocated for include the iconic mountains being celebrated last week.

Consider some of the following examples of our advocacy for permanent protection:

Mt. St. Helens – Most famous for its recent (by geological standards) eruption in 1980, this volcano attracts visitors from all over the world. Washington Wild helped advocate for the creation of the Mt. St. Helens National Volcanic Monument two years after the eruption, permanently protecting the volcano and providing a natural laboratory for natural regeneration.  WW and the Volcano Country Rivers Coalition have nominated the Green and Muddy Rivers and Smith and Pine Creeks, which flow out of the Monument, for permanent protections under the Wild and Scenic Rivers Act. WW is also helping to lead efforts to oppose a second effort to pursue an open pit copper mine by a Canadian mining company, just 12 miles from Mount St. Helen’s crater rim. 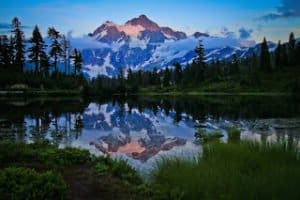 Photo courtesy of one of WW’s 2012 Photo Contest Winners

Mt. Shuksan – a Lummi word meaning “high peak,” Mt. Shuksan is one of the most photographed peaks in the world. It is located in the Stephen Mather Wilderness, which totals 634,000 acres. WW helped advocate for the designation of most of North Cascades National Park as Wilderness through the Washington Park Wilderness Act of 1988, permanently protecting Mt. Shuksan and surrounding peaks. WW is a founding member of the Cascades Wild Campaign, a long-term Puget Sound Headwaters Initiative, with a goal of permanently protecting up to 300,000 acres of wild lands and hundreds of miles of Wild and Scenic rivers.  Included in this proposal is the North Fork Nooksack River, whose headwaters originate on Mt. Shuksan, and Wilderness additions on the lower slopes of this peak.

Mt. Baker – located near the Canadian border, Mt. Baker has erupted several times during the 19th century. It is now a popular destination for outdoor recreationists and can be seen from as far away as Seattle on a clear day. WW helped designate the 119,000-acre Mount Baker Wilderness through the Washington Wilderness Act of 1984.  Currently, under the Cascades Wild proposal, WW is working to protect the headwaters of the Middle Fork Nooksack River and Glacier and Warm Creeks, which originate near Mt. Baker.