Today, Washington Wild attended a rally held by Senator Maria Cantwell who was joined by Washingtonians, outdoor and recreation enthusiasts, and local businesses to oppose the proposed entry fee increase to 17 National Parks. She called on the Trump Administration and Secretary of Interior, Ryan Zinke, to withdraw the National Park Service Proposal to nearly triple entrance fees from $25 to $70. This includes our own iconic Mt. Rainier and Olympic National Parks.

“To me this price increase in unconscionable,” said Cantwell. “What about those families who don’t have that in their budget. What about those families for whom Mt. Rainier and Olympic National Park are great part of their families recreation experience?…To me we are excluding Americans from a unique opportunity that we’ve all made an investment in: our National Park System. These are wonderful places and they are public lands and they should be affordable for everyone.”

She was joined in her message by outdoor recreation supporters such as Jim Whittaker, the first American to climb Everest, local business owners such as Phil Freeman who owns Copper Creek Inn near Mt. Rainier, and military veteran Rick Hegdahl who is the Pacific Northwest Program Director for the Vet Voice Foundation.

“Let us walk into the Forest,” said Jim Whittaker, the first American to summit Mt. Everest and the 2017 Washington Wild Conservation Voices Award winner. “Don’t put a price tag on it, let everybody go. I don’t want to walk the trails up Rainier and Olympus with just the 1% of the population. I want to go with everybody and have fun with their families and enjoy the beauty of nature.” 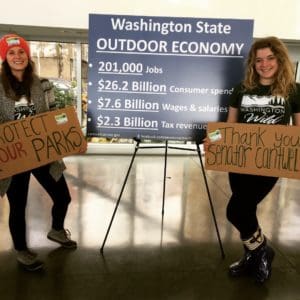 These speakers highlighted the importance of access to public lands and Olympic and Mount Rainier National Parks to local jobs and economic development. According to the Outdoor Industry Association, outdoor recreation is a major economic driver. In Washington state alone, outdoor recreation accounts for more than 201,000 direct jobs, $26.2 billion in annual consumer spending, $7.6 billion in wages and salaries, and $2.3 billion in state and local tax revenue.

You can write to the National Park Service until December 22, 2017 and let them know you OPPOSE this fee increase. National Parks are meant for all Americans – let’s keep it that way. Write today!