Brewshed® Session Ale: A Beer for Conservation in 2 States 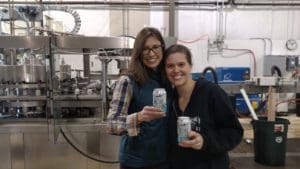 Over the last two years Washington Wild Brewshed® Alliance has seen unprecedented growth, growing from 8 brewery and beer community partners to almost 40.  It also went from raising less than $5,000 in 2013 to $35,000 by the end of 2015.  The growth has been nothing short of miraculous, but something else has also happened- the Brewshed® Alliance spread to Oregon.

We’ve been excited to work with Oregon Wild over the last two years to help initiate the Oregon Brewshed® Alliance and watch them make it grow.  Washington is ranked 2nd (behind California) for the highest number of breweries in the state with around 300 and Oregon isn’t that far behind at 4th with just over 200.  And both states have the signature wilderness that makes the Pacific Northwest unique and why so many people choose to call it home.  With there being ample breweries and ample wild lands and waters in both states it naturally flowed to have a Brewshed® Alliance in both as well.

Cans of the Brewshed® Session Ale will be available in local retailers and grocery stores throughout Washington, Oregon, and Idaho. 1% of all sales benefit the Brewshed® Alliance.

Out of this joint partnership has now come a beer, the Brewshed® Session Ale by GoodLife Brewing Company.  GoodLife chose the Brewshed® Alliance as the beneficiary for the
first beer in their sustainable session series, which donates 1% of all sales to the featured nonprofit.  In this case their donation will help keep both Washington and Oregon wild and green for generations to come.

Over MLK weekend I took a road trip down to Bend, Oregon to visit GoodLife Brewing Company and see the canning line in action.  Marielle Cowdin of the Oregon Brewshed® Alliance and I got the first two cans off the canning line (above).  The beer was so fresh that the cans didn’t even have the lid in place, we just drank out of the can as if it were a cup.  And the beer was delicious!

Experiencing the canning of the Brewshed® Session Ale was unique, but not just because of the behind the scene tour at 10 AM.  Also, because it really represented the growth of the initiative over the last two years and that was something that caused me to stop and ponder.

Baker Beaver gets visits GoodLife Brewing Company for the canning of the Brewshed® Session Ale.

There’s a frequently seen quote with no attributable author to my knowledge in the beer industry, “Beer will change the world.  I don’t know how, but it will.” I have been knee deep in the brewing industry and beer community now since 2012.  And I have to say it has been a truly amazing four years.  I believe that beer will change the world, because the people behind the beer want to change the world.  So they will. And the Brewshed® Alliance is just one way we are seeing this happen.

We at Washington Wild are excited to raise a beer tonight not just to celebrate the release of Brewshed® Session Ale, but also celebrate what all of our nearly 40 partners have helped us create.  Thank you to ALL of our partners, new and old, for helping us keep Washington, and now also Oregon, wild and green for generations to come!