Washington Wild is partnering with This Is Indian Country, an organization co-founded by Billy Frank Jr, to capture Pacific Northwest tribal elders traditional knowledge about the impacts of climate change to be shared with scientists, decision makers, teachers, students and the general public. 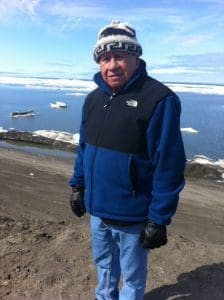 Billy Frank Jr. in the Arctic, courtesy of This is Indian Country

Prior to the passing of longtime tribal leader Billy Frank, Jr., the Nisqually leader and Chairman of the Northwest Indian Fisheries Commission co-founded a Washington state nonprofit showcasing the culture and projects sponsored by tribes, with particular focus on environmental issues and protection of critical natural resources. Billy went on to host several Emmy and CLEA Award-winning feature-length documentaries entitled, THIS IS INDIAN COUNTRY With Billy Frank Jr., including a prescient special in 2011 on the impacts of climate change on Alaskan Native villages.

Billy’s legacy lives on in many ways, including through the ongoing efforts of THIS IS INDIAN COUNTRY. Now with a $100,000 BECU Foundation Green Equity Initiative grant, the organization is partnering with the nonprofit Washington Wild in producing a series of 15 oral history videos for free distribution featuring tribal elders and leaders throughout the state speaking in particular about their observations and stories related to climate change.

“When we visited the Iñupiat and the Arctic, Billy called it ’the frontline’ of climate change, but now we see the battle lines are really throughout Indian Country. The tribes have learned about the scourge of climate change firsthand,” said Michael Harris, THIS IS INDIAN COUNTRY co-founder and board president.

Michael is also a longtime producer and photojournalist for ABC Television and other networks and has worked with tribes and helped them share their stories for more than 25 years. He and Billy completed two award-winning specials before the Presidential Medal of Freedom winner passed away in 2014, and together they wrote and shot segments for several more, including “The New Fish Wars — The Fight for Puget Sound.” The organization continues its “legacy project,” keeping its founder and host’s message and mission alive, editing and disseminating its large library of Billy’s enduring wisdom through new specials, including the 2021 documentary, “REFUGE,” on the efforts of Alaska’s Gwich’in Nation to protect their sacred Arctic Refuge from oil drilling. The film was released last year as the third THIS IS INDIAN COUNTRY With Billy Frank Jr. special and was nominated for a Northwest Regional Emmy Award as “Outstanding Documentary: Cultural.”

The 15 oral history interviews on Indigenous climate impacts will be posted on the THIS IS INDIAN COUNTRY website, as well as through YouTube and other platforms, and made available at no charge to students, teachers, researchers and the tribes. They’ll also be provided free-of-charge to regional news stations as edited two-minute packages and 30-second public service announcements. A related curriculum will also be produced and integrated into schools across the state with the aid of the Pacific Education Institute. They will be seen as part of the fourth special in the THIS IS INDIAN COUNTRY With Billy Frank Jr. series. They will also receive regional broadcast in the Pacific Northwest and potential national distribution through networks like First Nations Experience (FNX), which provides Native American and World Indigenous content for broadcast and streaming to 22 affiliate stations broadcasting into 25 states from Alaska to New York, reaching an audience of more than 74.5 million households.

“This is truly an exciting production,” said Michael, the day before embarking on the project’s first interviews at Quinault, Makah, Lower Elwha and Jamestown S’Klallam as well as Swinomish. “Our hope is it will give a significant boost to the tribes’ ongoing efforts to educate the public about their rights and objectives, as well as tribal initiatives like habitat restoration and green energy. But as our late friend, the great Eskimo warrior Etok Edwardsen Jr. used to say, ‘climate is an equal opportunity offender.’ Our First Nations often get hit the hardest, of course, but both Native and non-Native people need to be at the table to curb this crisis. We need to get it together. This climate project and this documentary needs to be like everything Billy had us do — it has to walk in both worlds. That’s the only way to save the planet.”

As grant administrator, Washington Wild is taking on the responsibility of managing the grant and overseeing the effort. Washington Wild has been a reputed champion of environmental projects for many years, and is a strong advocate for tribes and environmental justice. Tom Uniack, Executive Director of the organization says, “We are thrilled to have this opportunity to work with this program in the spirit of cooperation with the tribes.”

Steve Robinson, who serves on the Washington Wild board as well as the THIS IS INDIAN COUNTRY board, is co-producing this oral history project and will produce a related curriculum for statewide schools. He will work in concert with the Pacific Education Institute to do so.

“As someone who served as Billy Frank’s ‘PR guy’ for thirty years, and worked with tribes throughout the country, and beyond, I am anxious to see this project through to the end. When it comes to understanding the environment and the impacts of climate change, the tribes take a back seat to no one,” said Robinson. Robinson is of Salish Kootenai descent.