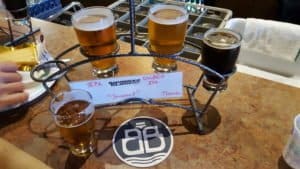 On February 27, the Washington Brewshed® Alliance visited Bainbridge Island Brewing, giving Washington Wild an opportunity to reach a more remote portion of our membership.  The Brewshed® event at Bainbridge Island Brewery allowed us to meet with the community.  We were thrilled to have both members and volunteers come out and join us for a few pints and support both the Washington Brewshed® Alliance and our conservation work.   The event successfully updated people on the Wild Olympics bill in Congress, raised money for our conservation work, engaged members and continued to build Brewshed® relationships.

However, this event offered even more to me as an individual than it did as Washington Wild’s Outreach Coordinator.  It gave me a reason to visit the community my dad grew up in and the island he grew up on for the first time in my life.  I have lived in Washington State all my life, but only one of my parents grew up here.  My mom is from Colorado, and despite the distance, I saw her childhood home at a very young age. Until the Brewshed®Happy Hour for Washington Wild last month, I had never even set foot on Bainbridge Island, let alone seen the house my dad called home as a kid.  This event gave me the excuse that I apparently needed to call him up and ask him to finally show me around the beautiful island community where he grew up.

My dad went to college in the seventies and has rarely been back to the island since.  In that time, the community and the physical structures have changed dramatically, but some aspects of the island are still the same.  There are still beautiful stretches of forest along the sides of the road, but his high school was replaced by a superior building.  The house he grew up in is still standing, but the lot next door that used to be a park is now someone’s home.  The most striking part for me that remains, however, is the view from my father’s childhood living room.

When I was growing up, my dad would often mention the view from the home he grew up in, and his voice would be wistful as he lost himself in the picture it brought to mind.  It took him over 25 years to show me, but he frequently mentioned wishing that I could see it — because only then would I understand.  He described how the sunset would sparkle off the water at low tide and how, as kids, they’d chase after the light in the muddy shallows close to shore.  He spoke of the mountain in the distance that towered over the water as a constant backdrop, almost like a guardian.  I have an overactive imagination, but when I was standing there looking at the Olympic Mountains across the water, I realized even my imagination couldn’t capture what his words tried to describe.  He grew up with a view that can hardly be captured in pictures or words.

Staring out across the water at the breathtaking mountains with blue herons flying overhead, the inter-generational aspect of Washington Wild and all other conservation organizations truly struck me.  Since my dad left the island, so much had changed about this small island community.  Now there is a lavish shopping center, small homes like his have been taken down and replaced with bigger ones, vacant lots are now occupied, a closed off bunker area is now a park, and of course, the island now has its very own high-quality brewery.  But one thing was the same.  The wilderness across the water was still there, providing the beautiful and breathtaking view.

I go backpacking with my father annually, so we have shared some amazing experiences in beautiful landscapes together.  But this was different, because I was seeing something that enchanted him regularly as a child.  For once I could actually see what my father’s eyes saw as a child, quite literally.  That astonishing landscape-view of a mountain over the water that defied both words and pictures was part of my family history.  For the first time, sharing a view of nature was truly between generations, because the view was from my dad’s life before I existed, yet it became part of mine in that shared moment.  In that shared experience we communicated between generations.

Wilderness, like that across the water from Bainbridge Island on the Olympic Peninsula, is the legacy we leave behind for future generations.  By permanently protecting over 100,000 acres of Wilderness, the Wild Olympics bill, if passed, will protect the opportunity for parents to share with their kids the amazement they also felt as a child.  It’s not just about protecting Wilderness for the next generation, but also to protect a way of connecting between generations.  What humans build we regularly take down, the buildings get remodeled and replaced.  However, the Wilderness we protect today will still stand connecting generations through time.