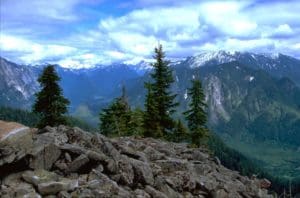 After squinting to watch the streaming video on my computer of the U.S. Senate  vote, a voice confirms an accomplishment seven years in the making. The Alpine Lakes Wilderness Additions and Pratt and Middle Fork Snoqualmie Rivers Protection Act passed the U.S. Congress. Next stop President Barak Obama’s desk.

The feeling was one of exhilaration, joy and relief after a long campaign resulting in 22,000 acres of additions to the Alpine Lakes Wilderness and nearly 40 miles of new Wild and Scenic Rivers

Little did I know that feeling would nearly be eclipsed by another as my phone rang. On the line was the excited and steady voice of Senator Patty Murray (D-WA), our senior Senator and the champion of the legislation in the Senate for the last seven years. “I just wanted to say thank you for all your work,” said Murray, “We would not be here without you.”

You may not know it by her stature and demeanor, but Senator Murray is arguably the most accomplished Wilderness champion in the U.S. Congress and one of the most patient, unwavering and dedicated champions for public lands our state has ever seen. Having worked with her in a leadership role on the 106,000-acre Wild Sky Wilderness (designated in 2008) and the Wild Olympics proposal (introduced into Congress this year), her kind words will resonate with me for years to come.

On the Alpine Lakes legislation she had bipartisan help from key members of the Washington Congressional delegation.  Congressman Dave Reichert (R-WA08) initiated the Alpine Lakes Wilderness additions and has been a tireless and relentless advocate for protecting this special place. Congresswoman Suzan DelBene (D-WA01) inherited the Alpine Lakes proposal as part of redistricting and has been a passionate champion for Wilderness and Wild and Scenic Rivers during her initial congressional term. Senator Maria Cantwell’s reputation as a strong conservation advocate and leadership role on the Senate Energy and Natural Resource Committee has been a great asset.

The Alpine Lakes legislation will protect an additional 22,000 acres of wilderness adjoining the existing Alpine Lakes Wilderness Area and add 10 miles of the Pratt River and nearly 30 miles of the Middle Fork of the Snoqualmie River to the National Wild and Scenic Rivers System. The legislation will protect clean water, native trout and world-class outdoor recreational opportunities in the closest mountain valley to the greater Seattle metropolitan area.

“With the proximity of the Pratt and Middle Fork of the Snoqualmie rivers to the major urban center of Seattle, residents of the region have unparalleled access to an abundance of recreational opportunities on these world-class rivers,” said Thomas O’Keefe, Pacific Northwest Stewardship Director for American Whitewater. “As someone who has explored hundreds of river miles across the country and around the world, I can confidently say that we have some of the most spectacular river resources of any place in the world.”

Next Generation of Washington Wilderness

While the Alpine Lakes Additions are the most recent cause for celebration, it is part of a focused statewide approach to protect additional Wilderness that began 15 years ago. On the shores of Lake Wenatchee in 1999, Washington Wild held a special meeting for Wilderness activists around the state to discuss and identify opportunities for new Wilderness designations, especially on national forest lands. The last Forest Service-designated Wilderness in Washington came in the 1984 Washington State Wilderness Act.

Those discussions culminated in a seminal meeting in 2000 between the statewide Wilderness community and Senator Patty Murray about doing the groundwork to develop the first of several new efforts to designate Wilderness in Washington.

In 2007, before Wild Sky was designated, Wilderness advocates worked to develop a proposal with Congressman Dave Reichert to add 22,000 acres to the Alpine Lakes Wilderness. Later, Senator Murray would join Reichert to add Wild and Scenic Rivers designations for the Pratt and Middle Fork Snoqualmie Rivers to a bipartisan proposal.

As Alpine Lakes moved through Congress, Washington Wild and a coalition of Wilderness and river proponents on the Olympic Peninsula worked with Congressman Norm Dicks (D-WA06) and Senator Murray to develop the Wild Olympics Proposal. The Wild Olympics proposal, which would designate 126,000 acres of new Wilderness on Olympic National Forest and more than 460 miles of Wild and Scenic Rivers on the Olympic Peninsula, was most recently introduced into Congress in 2013 by Senator Patty Murray and Representative Derek Kilmer.

Washington Wild’s leadership on wild lands campaigns over the last decade has focused on protecting low-elevation wild lands that were by and large not protected by past Wilderness designations. Out of all the national forest wilderness areas previously designated statewide, only 6% of the total was considered low elevation (i.e., below 3,000 ft.). These underrepresented low elevation areas are a major focal point in the Next Generation of Wilderness proposals because they include:

–  Salmon spawning streams and critical habitat for fish and wildlife

The recently designated Wild Sky Wilderness deliberately included close to one-third of its acreage as low elevation forests. Senator Murray referred to these critical areas as the “heart and soul” of the proposal during the Wild Sky campaign. About half of the acreage of the Alpine Lakes Additions is comprised of forests and watershed below 3,000 feet elevation

While Oregon has 2,000 miles of designated Wild and Scenic Rivers, Washington has just 250 miles. Recognizing the potential to increase the number of protected miles through collaboration,  Washington Wild led a one-day workshop on November 8, 2008, to bring statewide Wilderness and Wild and Scenic River advocates together to discuss, understand and commit to the power of pursuing both Wilderness and river protections in public land proposals. Since then, Washington Wild has changed its name to reflect a broader focus on Wilderness and water protection. The Alpine Lakes additions were the first manifestation of this “river renaissance” with its inclusion of Wild and Scenic River designations for the Pratt and Middle Fork Snoqualmie Rivers. The Wild Olympics proposal, which was introduced into Congress this year, would designate more than 460 miles of Wild and Scenic Rivers on the Olympic Peninsula. Unbelievably, they would be the first designated rivers on this iconic landscape.

As we celebrate the passage of the second Wilderness bill in Washington State since recent efforts began in 2000, I am filled with hope and optimism for our future. As a result, we have nearly 130,000 acres of underrepresented low-elevation Wilderness and the first Wild and Scenic River designations in the North Cascades in 35 years.

None of this would have been possible without key leaders in our Congressional delegation, and above all the patience and leadership of Senator Patty Murray. Sen. Murray has been a great friend of Washington Wild, as she made clear in a recent video, and we look forward to continuing to work with her on Wild Olympics and other efforts to protect Washington’s wild lands and waters.