Today Washington Wild coordinated a comment letter to the Washington Congressional Delegation signed by 58 conservation, recreation, and wildlife organizations, electeds, and businesses. In 2019, the U.S. Forest Service’s (USFS) Legacy Roads and Trails (LRT) program was virtually eliminated by the Consolidated Appropriations Act, removing a decade-old dedicated budget line item for this important work. The letter asks that this distinct line item be reinstated in the FY 2021 Interior-Environment Appropriations Bill at $50M.

The LRT Program was started in 2008 and is a widely popular, bi-partisan conservation program that directs USFS work on urgently needed road decommissioning, road and trail repair and maintenance, and removal of fish passage barriers. The program emphasizes areas where Forest Service roads may be contributing to water quality problems in streams and water bodies that support threatened, endangered, and sensitive species or community water sources. 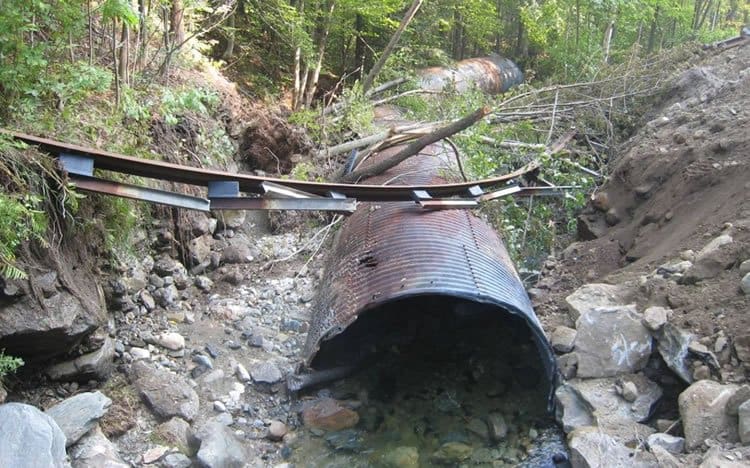 Photo courtesy of the US Forest Service

The LRT program was first conceived in Washington State, where state agencies, private forest landowners, and the USFS committed to address their forest road problems – as required by the Endangered Species Act (related to listed salmon runs) and the Clean Water Act.  The deadline for completion was 2015.  From 2000 to 2007, while state and private landowners made significant progress, the USFS fell far behind, mostly because the general road maintenance budget was insufficient.  Several groups worked with state agencies and former Representative Norm Dicks (WA-D-06) to find a solution. And so, the Legacy Roads and Trails Program was established.  Not only have Washington’s watersheds that support clean and safe drinking water, wildlife and fish habitat, and recreation opportunities benefited, but so have lands and waters across the nation.

From 2008 to 2018, $32 million in LRT funding has produced significant measurable results:

In Washington alone, the Forest Service maintains 21,561 miles of roads, which is enough to drive from Seattle to Washington D.C. eight times! Only 67% of these are technically “open” for public access, and many of those open roads are actually inaccessible due to lack of maintenance, landslides, sinkholes, potholes, large gullies, broken culverts and bridges, and storm damage.

The Forest Service also maintains 9,167 miles of trails in Washington, which is enough to hike from Seattle to Washington D.C. more than three times! Many of these trails are also falling apart, becoming a risk to public safety. There are still over 990 barriers to fish passage on national forest lands.

The Legacy Roads and Trails program aims to adapt the road system to a more manageable size over time, reducing fiscal and environmental burdens and enabling the Forest Service to ensure more reliable access. It’s a simple solution to a formidable problem, but it needs funding to succeed.