But every acre of wilderness safeguards much, much more than stands of ancient Western red cedars and free flowing waterways. Each acre also ensures protection for every living thing that calls the forest or stream its home. Washington’s native species would be nothing without the expansive natural forest ecosystems we work so hard to protect, nor would the forests be as healthy and vibrant as they are without the wildlife inhabiting them. That’s why Washington Wild’s wildlands and waters campaigns are wildlife campaigns, too. 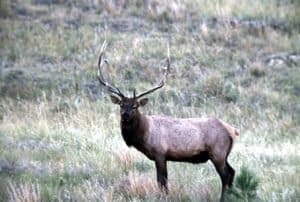 The Rocky Mountain elk is a subspecies of elk native to the Cascade Crest in Washington. Elk belong to the family Cervidae, which also includes deer, moose, and caribou. Rocky Mountain elk are among the largest of the cervids, and are one of the largest land animals in North America.  All members of Cervidae are ruminants, meaning they chew and swallow their food, regurgitating it several times. During spring and summer, elk graze on soft, tender plants such as grasses, sedges, and flowers. When food becomes scarcer in winter, they switch to browsing, eating mainly small branches and twigs, and occasionally evergreen needles. Because elk herds are so large and because rumination is a fairly inefficient digestion method, elk require abundant food supplies. Elk typically split up into cow-calf herds and bull herds for most of the year, but in the fall they come together to mate and males compete for the breeding females (cows).  Like most cervids, elk males (bulls) grow antlers every year and shed them when the breeding season is over.

While Rocky Mountain elk are doing quite well throughout their range in Washington, it wasn’t always that way. Their success is due in large part to Wilderness areas like Alpine Lakes. Elk need large expanses of uninterrupted habitat located well away from human settlements and development to sustain healthy herd sizes. A good amount of suitable elk habitat already exists in the Alpine Lakes Wilderness, but the Wilderness Additions and Middle Fork Snoqualmie and Pratt River Proposal would protect key low-elevation elk habitat. Riparian zones, such as those surrounding the Middle Fork Snoqualmie and Pratt Rivers, are full of some staples in elk diets—aspen, cottonwoods, and willows. With Wild and Scenic River designation, the prime elk habitat offered by the Middle Fork Snoqualmie and Pratt Rivers would be protected from development and degradation. The passage of this proposal is critical for protecting and maintaining healthy elk populations in Washington for years to come.

There are at least 13 subspecies of cutthroat trout in the western United States, but the coastal cutthroat is the only one that is anadromous, meaning it spends part of its life in a marine environment before returning to its home stream to spawn. Unlike salmon, though, coastal cutthroat trout are not universally anadromous. Some fish migrate out to sea, while some—like those in the Middle Fork Snoqualmie and Pratt Rivers—remain in fresh water and become resident fish. Very young cutthroats, called fry, are smaller than and unable to compete with salmon and steelhead fry, so they tend to reside in parts of streams undesirable to other salmonids, such as headwaters. Because of this, there are healthy alpine populations of resident cutthroats in Washington rivers that are above waterfalls too large for salmon to climb.

By supporting WW you will not only be helping to protect our wild lands and waters but also the wildlife that depend on them.