But every acre of wilderness safeguards much, much more than stands of ancient Western red cedars and free flowing waterways. Each acre also ensures protection for every living thing that calls the forest or stream its home. Washington’s native species would be nothing without the expansive natural forest ecosystems we work so hard to protect, nor would the forests be as healthy and vibrant as they are without the wildlife inhabiting them. That’s why Washington Wild’s wild lands and waters campaigns are wildlife campaigns, too.

The Cascades Wild Campaign is a long-term Puget Sound Headwaters Initiative advocating for new Wilderness additions to the Mt. Baker, Noisy Diobsud, Glacier Peak, Boulder River, Henry M Jackson and Alpine Lakes Wilderness Areas and new Wild and Scenic River designations for important rivers, streams and their tributaries. This effort is a crucial push to protect vital wild lands and waters on the west slope of the North Cascades from the I-90 corridor to the Canadian border. 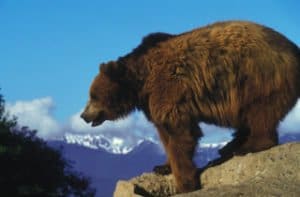 There are two Distinct Population Segments of grizzly bears in Washington—one in the Selkirk Range in the northeast corner of the state, and one in the North Cascades. Distinct Population Segments are groups within a species that are separate from each other geographically, behaviorally, or ecologically. Grizzlies are large bears, and in the lower 48 females typically weigh 250-350 lbs. and males 400-600 lbs. Although they’re also known as brown bears, their fur can range from light blond to black. It’s thought that the variation in fur color comes from regional differences in diet and climate patterns rather than genetics. When available, small mammals and fish make up most of grizzly bears’ diets, but they’re extremely opportunistic and will eat berries, roots, grasses, and tubers as necessary. These bears need abundant food to build up sufficient fat and protein stores to last them through their 4-6 month long hibernation during the winter.

Although grizzly bears are solitary for the most part, habitat connectivity and interaction between individuals is essential for their success. Fragmentation of forests makes male-female encounters very rare. Recent research shows that human settlement in mountain valleys and major highways have broken up bear populations and caused a significant decrease in female migration. With only male bears migrating to find mates, the likelihood of successful mating and population growth decreases. Grizzly bear numbers in the North Cascades are already very low (fewer than 20 individuals), so it’s imperative that the bulk of the North Cascades Ecosystem remains wild and roadless to facilitate the recovery of this iconic Western species. A Wilderness area like Cascades Wild would give grizzly bears the protection they need. 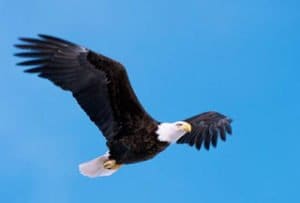 Bald eagles are large sea eagles native to North America, with wingspans that can reach almost 7 feet. Although Benjamin Franklin was rooting for the wild turkey, the bald eagle was selected as the national emblem of the United States in 1782. These raptors may appear regal while sitting perched atop a tree or soaring through the sky, but they make a living for the most part by harassing other birds and stealing their food. Their diet varies regionally, however, and in the Pacific Northwest most of their nourishment comes from salmon they’ve caught themselves. Bald eagles are easily identified by their stark white head and tail plumage, but juveniles don’t get these characteristic markings for about five years and are completely covered by mottled brown and white feathers. For most of the year, bald eagles only associate with their mates, which they remain with for life, but during the winter hundreds (and sometimes thousands) of bald eagles will travel many miles to congregate in specific wintering grounds. Wintering grounds are usually selected for high food availability, such as large salmon runs. There are also resident bald eagles that don’t migrate in the winter—these birds usually live farther south where the rivers and lakes they live by don’t freeze.

These raptors are one of the biggest success stories of the Endangered Species Act. Due to hunting and trapping, and reproductive failures caused by the pesticide DDT, bald eagle numbers dropped drastically throughout the first half of the 20th century. By the 1950’s, there were a little more than 400 breeding pairs in the lower 48. In 1967 the bald eagle was listed as federally endangered and a few years later in 1972 the use of DDT was banned. Over the next few decades, bald eagle populations rebounded dramatically and in 2007 they were delisted. The future looks bright for these birds, but protecting their habitat and the rivers where they get their food is still extremely important. Bald eagles are thought to be very ecologically important—the decaying salmon carcasses they leave on the forest floor provide massive nutrient flows to plants, fungi and bacteria. The Cascades Wild proposal will protect important wintering grounds for bald eagles, as well as year-round habitat. The Sauk and Suiattle Rivers provide excellent eagle habitat, and nearby Illabot Creek hosts one of the largest wintering populations in the lower 48. Rivers like the Sauk and Suiattle and the wildlands around them would be permanently protected with the passage of the Cascades Wild proposal, likewise ensuring the permanent protection of bald eagles in the area. 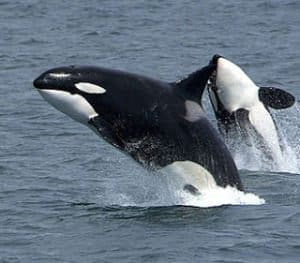 Read parts 1-3 of the Wilderness Campaigns are Wildlife Campaigns blog series:Few native wildlife species in Washington are as iconic as the orca, and while you’d be hard pressed to find one while backpacking through the proposed Cascades Wild Wilderness, this marine mammal is an important recipient of the benefits of intact upland ecosystems that the Cascades Wild proposal promises to protect. Killer whales belong to a group of mammals called cetaceans, and are characterized by a marine and carnivorous lifestyle. Although we call them whales, orcas are actually much more closely related to dolphins and porpoises than they are to other whales like blue whales and humpbacks. Orcas are highly social animals—they exhibit a matrilineal social structure, meaning that groups are comprised of a female, her sons and daughters, and her daughters’ offspring. It is rare for individuals to leave the pod for even a few hours. Pods hunt together, and in this region their main food source are large, fatty Chinook salmon. Washington’s waters see three populations of orcas regularly. The transient and offshore populations spend much of their time elsewhere, but the southern resident population resides here for much of the year. There are three known resident pods in the southern resident population—J, K, and L pods. These pods consist of 20-40 whales and spend most of their time in the waters surrounding the San Juan Islands. Orcas are known as apex predators, meaning they are top-level predators with no predators of their own. Apex predators are very ecologically important because of the role they play in controlling the populations of smaller prey species and maintaining ecosystem diversity.

While apex predators have a large impact on populations of their prey, changes in abundance of their prey can in turn greatly influence predator populations. Such is the case with Washington’s orcas and Chinook salmon. Due to the decline in Chinook salmon populations in Puget Sound over the last several decades, the opportunity for orca population growth in Washington and British Columbia is limited. Maintaining healthy salmon populations is extremely important to protecting Washington’s southern resident orcas, which were added to the US Endangered Species List in 2006. The Cascades Wild proposal will protect important salmon spawning grounds in the North Cascades, and this will in turn greatly benefit Washington’s vulnerable orca populations.

By supporting Washington Wild you will not only be helping to protect our wild lands and waters but also the wildlife that depend on them.