With your support, Washington Wild was able to achieve great strides in our conservation programming.

The Wild Olympics Coalition announced over 150 new endorsements from Olympic Peninsula elected officials and businesses rallying behind the Wild Olympics Wilderness and Wild & Scenic Rivers Act. The additions bring the number of Olympic Peninsula endorsers to 700. More than 12,000 local residents have signed petitions in support. If passed, the bill would designate the first new Wilderness areas on Olympic National Forest in three decades and the first ever Wild & Scenic River designations.

In an elusive bit of good news, the Senate narrowly voted to keep a key environmental regulation that stops companies from burning greenhouse gasses. In addition, the expiration of a legislative deadline prevented a resolution that would have allowed drilling in our National Parks. Another piece of legislation that was meant to sell off 3 million acres of public lands was also withdrawn after an outpouring of public support to keep public lands in public hands. Washington Wild sent out action alerts and urged our members to write their elected officials on all of these pieces of legislation. 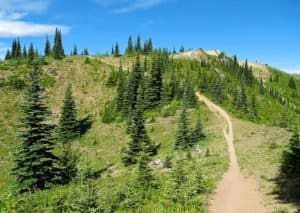 Mt. Baker-Snoqualmie National Forest released a decision notice on efforts to maintain and reduce the road system to a sustainable size on the Greenwater watershed adjacent to Mt. Rainier National Park. In response to a Washington Wild coordinated letter, the Forest Service made positive additions to their plan, including maintaining passenger car access to the popular Noble Knob Trail, clarifying protections for endangered species, and adding additional miles of decommissioning for unneeded roads on the watershed.

In July, Secretary Zinke announced that Washington’s own Hanford Reach National Monument would not be impacted by the review process instigated by President Trump’s Executive Order in April of this 2017 due to an outpouring of public support. In addition, both Senators Patty Murray and Maria Cantwell spoke with Secretary Zinke and to the public calling on them to stand up for these unique landscapes in Washington and across the US. 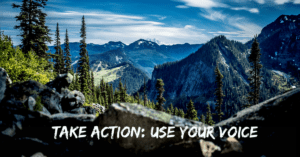 In the beginning of 2017 Washington Wild launched our new online advocacy system! You can fill out a simple form to send comments and letters to your elected officials on conservation issues important to you with a click of a button. This year Washington Wild supporters sent 2,500 letters on 30 issues, including increasing entry fees in our National Parks, drilling in the Arctic, selling off millions of acres of public lands, and new road building in roadless areas in Washington.

As a result of advocacy from Washington Wild, eight of the ten members of the U.S. House of Representatives from Washington State have cosponsored a resolution pushing back on recent congressional efforts to weaken protections for our public lands. The resolution expresses that America’s federal public lands are national treasures that belong to all Americans.

This year, the Mt. Baker-Snoqualmie National Forest issued a decision to close the Lake Serene and Bridal Veil Falls trail from September 25th, 2017 to July 1, 2018 to allow access to logging by the Weyerhauser company. Washington Wild coordinated a joint comment letter seeking a long term solution to logging on such a popular trail. After an outpouring of public support, conservation efforts prevailed and the private property adjacent to the trail was purchased keeping Lake Serene and Bridal Veil Falls logging free permanently.